Origins of The Twelve Days of Christmas 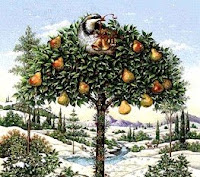 The Twelve Days of Christmas came from various influences. In the 6th century, the Second Council of Tours proclaimed the sanctity of the twelve-day period from Christmas to Epiphany, the January 6th feast day commemorating the arrival of the Wise Men in Bethlehem. Later, in 1752, 12 days were dropped from the year when the switch occurred from the Julian calendar to the Gregorian calendar. The December 25th date was effectively moved 12 days backwards. Some Christian church sects, called Eastern Orthodox, still celebrate Christmas on January 6th, which was previously December 25th on the Julian calendar.

Another possible connection to the number of days can be made to the twelve apostles of the Savior during his earthly ministry. The oldest reference to a twelve-day winter celebration goes back to the Mesopotamians, to help their god Marduk tame the monsters of chaos for one more year. These twelve days also correspond with the amount of days that the return of the sun was celebrated during Saturnalia by the ancient and Roman pagans.

The evening of the final day, or Epiphany, became known in Europe as Twelfth Night. The popular Christmas song “The Twelve Days of Christmas” was inspired by the Twelfth Night celebrations that occurred in England. It was a big night for dancing, feasting and drinking: there were usually a lot of “lords leaping” and “ladies dancing”, while the dining tables were laden with partridges, ducks and geese. Those who found a bean inside a holiday dessert called the twelfth cake, a large pie-like pastry, were chosen to be the king and queen of the night’s festivities.

Additionally, the "Twelve Days of Christmas" song is claimed to have religious background and meaning. From 1558 until 1829, Roman Catholics in England were not permitted to practice their faith openly. It is claimed that this carol was written as a catechism song for young Catholics. The lyrics were to have two levels of meaning: the surface meaning plus a hidden meaning known only to members of the Catholic faith. Each element in the carol was to be a code word for a religious reality which the children could remember. The alleged Catholic representations were as follows:

1. The partridge in a pear tree was Jesus Christ on the cross.
2. Two turtle doves were the Old and New Testaments.
3. Three French hens symbolized the three members of the Godhead, the Father, the Son and the Holy Ghost; or alternately stood for faith, hope and charity.
4. The four calling (or colly) birds were the four gospels of Matthew, Mark, Luke and John.
5. The five golden rings recalled the first five books of the Old Testament, also known as the Pentateuch, Torah or the Law.
6. The six geese a-laying stood for the six days of creation.
7. Seven swans a-swimming represented the seven gifts of the Holy Ghost: Prophecy, Service, Teaching, Exhortation, Giving, Leadership, and Mercy (see Romans 12:6-8).
8. The eight maids a-milking were the eight beatitudes.
9. Nine ladies dancing were the nine fruits of the Holy Spirit: Love, Joy, Peace, Patience, Kindness, Goodness, Faithfulness, Gentleness, and Self-Control (See Galatians 5:22-23).
10. The ten lords a-leaping represented the ten commandments.
11. The eleven pipers piping stood for the eleven faithful disciples.
12. The twelve drummers drumming symbolized the twelve points of belief in the Apostles' Creed, namely: belief in the Father, belief in the Son, the virgin birth, the atonement, Christ's ministry after death, his ascension to heaven, his role as Judge, belief in the Holy Ghost, belief in the church, forgiveness of sins, the resurrection, and eternal life.
Posted by The Youngs at 9:09 PM