The word carol is derived from the Greek choraulein, a dance that was done in a circle and accompanied by flute music. The dance became popular with the French, who replaced the flute music with singing. Soon, the singing became the focus of the carol, often performed as a part of religious plays. Although carols were traditionally sung throughout the year, by the 1600's the most popular time for singing them was at Christmas.

During the 12th Century, St. Francis of Assisi formally introduced Christmas carols as part of Christian church services. One of the earliest known Christmas songs, Jesus Refulsit Omnium, was composed by St. Hilary of Poitiers. O Come, O Come Emmanuel is one the early Latin carols which remains popular today. Martin Luther was known to have accompanied family and friends on his lute as they went caroling.

The earliest known English carol was written by Ritson about 1410. The first American Christmas carol, Jesus is Born, was written by John de Brebeur in 1649. One of the greatest works of Christmas music was Handels Messiah, composed and first performed in Dublin, Ireland in 1742 (see Performances, Movies and Television).
As the celebration of Christmas became more widespread in the early to mid-1800’s, the singing of carols grew as a holiday custom. Musicians called “waits” would stroll the community singing favorite Christmas songs.

In the same year that Clement C. Moore published A Visit From St. Nicholas, in 1822, Davies Gilbert published one of the first books of carols music, Collection of Christmas Carols. It contained several old French carols and Swedish melodies set to new words. An extensive repertory of today’s Christmas carols originates from Britain, Germany, France and Hungary, from the 15th to the 17th Century.

Perhaps the best-known Christmas Carol is Silent Night, which was written in 1818 by Austrian Father Joseph Mohr and Church organist Franz Gruber. The story is told of how Father Joseph Mohr learned on the day before Christmas that the organ in the Church of St. Nicholas, in Oberdorf, Austria was broken and would not be repaired in time for that night’s Midnight Mass service. Determined to have music that night, he sat down and wrote three stanzas, and convinced Franz Gruber to set the words to music. That night, the two men performed their new song, originally titled in German Stille Nacht, Heilige Nacht, accompanied by Father Mohr’s guitar. Today, Silent Night is sung in more than 180 languages by millions of people. (For more on Carols, see the post on History of Christmas Carols) 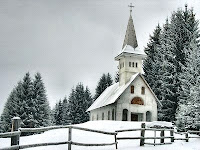 The biggest selling recorded Christmas carol of all time is Bing Crosby’s White Christmas, with over 30 million copies sold. Although the list of popular Christmas carols grows longer every year, there are some popular carols that have been around for a long time and will probably remain a part of the Christmas celebration for many years.

The custom of caroling has its roots in old England, with the tradition of wassailing, when a group of carolers would carry around a wassail bowl during the Twelve Days of Christmas, offering samples. Thus, the song “Here we come a-caroling (or a-wassailing) among the leaves so green”. Sometimes after singing carols in front of homes, the carolers would be invited in and offered food, money or a re-fill of the wassail bowl. The tradition of caroling has continued through the years, especially in England and America, although without the carrying of the wassail bowl (see The Tradition of Wassail).
Posted by The Youngs at 4:26 PM