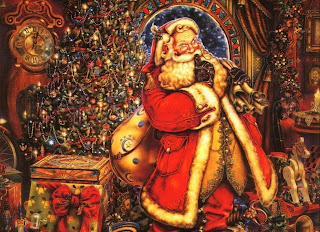 The name of “Santa Claus” is an American pronunciation of “Sinter Klaas”, which is the Dutch name for St. Nicholas. The Dutch name and traditions of Sinter Klaas came to America with the early Dutch settlement of New Amsterdam (now New York).

The name Kriss Kringle came from the Pennsylvania German “Christ-kindl”, or Christ child, which became altered with English pronunciation. This name, which was meant for the young gift-giving boy Jesus, became confused in America to be another name for St. Nicholas. Two books published in the 1840s established a bridge to the new character, which looked more like Santa Claus: Kriss Kringle's Book, and Kriss Kringle's Christmas Tree - A holiday present for boys and girls.

Transforming the Old World St. Nicholas into the American Santa Claus was primarily the work of the following nineteenth century New Yorkers of varied national backgrounds:

* Washington Irving offered the first literary description of St. Nicholas in America in his 1809 book A History of New York from the Beginning of the World to the End of the Dutch Dynasty, under the pen name of Diedrich Knickerbocker. In this story, St. Nicholas came riding over the tree-tops in a wagon, bringing presents to children.

* John Pintard included the first known picture of St. Nicholas to be made in America in his 1810 poem Sancte Claus Goed Heyligman, adapted from the old Dutch song about the gift-bringer.

* William B. Gilley, a friend to Clement C. Moore, described Santa's sleigh being pulled by a lone reindeer in his 1821 book A New Year's Present for Little Ones from Five to Twelve.

* Clement C. Moore, in 1822, provided the first definitive description of the Santa Claus we know today in A Visit from St. Nicholas, also known as The Night Before Christmas. His fifty-six line poem, written as a gift to his children, changed the Old World St. Nicholas into Ajolly St. Nick,@ a plump, happy-go-lucky elf with a sleigh full of toys and eight flying reindeer. Illustrations in the original edition show Santa to be an elf only three to four feet high and the reindeer only as large as collie dogs. A short, rotund Dutch gardener in Moore's neighborhood may have served as the model for the new St. Nick. 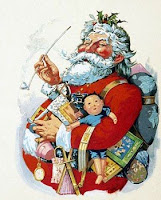 * Thomas Nast, illustrator for Harpers Weekly, created several illustrations of St. Nicholas, each year from 1863 to 1886. These creations assisted in the visual definition of the modern day Santa Claus. Each year Nast added more details to his version of the Santa legend, including the home-workshop at the North Pole and the Naughty and Nice list.

* Theodore Ledyard Cuyler wrote of his childhood memories of Christmas on the farm in western New York in the 1820's. He told of how they hung stockings at the fireplace for Santa Claus, and mentioned that their black cook witnessed Santa writing him a letter.

An important step in the final picture of the man Santa Claus occurred in the 1930’s when the Coca-Cola Company ran a series of advertisements with Santa Claus. Illustrated by artist Haddon Sundblom, these advertisements created more solidly the modern-day depiction of Santa Claus with a jovial face and a big beard.

In 1890, the tradition of visiting Santa at the store began when the owner of the Boston Store in Brockton, Massachusetts dressed up as Santa and invited children to sit on his lap and whisper in his ear what they wanted for Christmas.

Sending letters to Santa became a popular tradition in the 1870’s, and within 20 years, they were inundating the Post Office.

In England and America, the tradition of the visit of Santa Claus occurs in secret in the middle of the night on December 25th, and he usually enters the home through the chimney. Often, a plate of cookies and a glass of milk are left for him near the hearth. Children arise in the morning to see and open their surprises.

In places such as Scandinavia and Germany, however, Santa’s visit happens a little differently. Santa comes on the evening of the 24th of December, knocking on and entering through the door like normal people. Once inside, he greets those inside and hands them his gifts, which are then opened. The gift-giver of many other countries will likewise enter through the door.
Posted by The Youngs at 3:25 PM